Hubble Space Telescope has captured a new image of nearby spiral galaxy Messier 61 (M61), AKA NGC 4303.

M61 is only 55 million light-years away from Earth, it is about the size of our Milky Way galaxy (depending on whom you ask), and is about a 100,000 light-years. 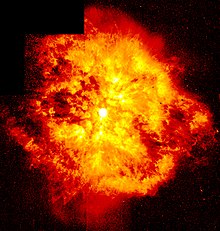 M61 is an active galaxy with six supernovae observed within the last 100 years or so.

Hubble took this image as M61 was face-on. The spiral arms are very detailed.  The outer arms, seen in blue, are stellar nurseries where stars are being formed.

Messier 61 is part of the Virgo (just like me!) Galaxy Cluster, a massive group of galaxies in the constellation of Virgo (the Virgin – not so much like me in many respects).

Galaxy clusters (groups of galaxies) are some of the biggest structures in the Universe. The Virgo Cluster has over 1300 (and up to 2000) galaxies.

The Virgo Cluster also forms the central region of a Local Supercluster.  As the name suggests, it is an even bigger grouping of galaxies.