As I said yesterday, April is going to be a busy month.

April 14-15 (depending on where in the world you are Carmen San Diego), a total lunar eclipse will be visible in the Pacific Ocean region, including Australia, as well as North and South America. 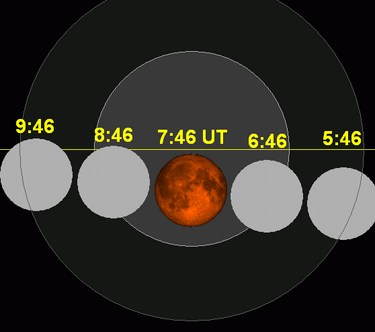 Once the Moon is in total eclipse, it looks red.  Hence the name Blood Moon.  However, this is normally how the Moon looks in total eclipse, so it doesn’t have anything to do with the doomsday prophecies running around the Internet.  Unfortunately, April has another doomsday prediction that I will discuss tomorrow. What makes this total eclipse even more event worthy is the fact that Mars will appear right next to the Moon during its eclipse and should be spectacular as Mars is just coming out of its opposition with the Earth.

Time to break out the cameras or cellphone and take some images.  I will try to make some instructions for taking images of the Moon that should help anyone interested.