Ok, after watching this video, this has to be the luckiest guy in the world for two reasons.

1.  He’s the first person to catch a flamed out meteorite in mid-air barely missing him; and

2. he’s the first person to catch a flamed out meteorite in mid-air barely missing him. 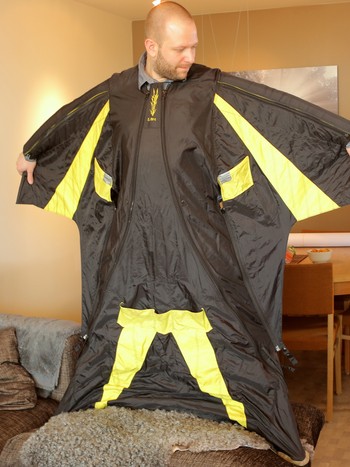 The lucky Norwegian skydiver is Anders Helstrup.  He was just out for typical jump in his wing-suit in 2012 when the meteorite went by him.  He and many other people have spent the last couple of years of hunting in the woods, marshes and muck to find the meteorite.  Alas, it still remains at large.

Geologists believe that the meteorite had been part of a larger meteor that exploded about 20 kilometres above Helstrup during his jump (see number 1 above).  They also believe that it is a fairly ordinary Breccia meteorite.  However, due to the filming during flight, the meteorite has increased in value greatly.  I’m not sure what Mr. Helstrup plans to do with the meteorite if he finds it, but all indications are that he would give it to the Natural History Museum in Oslo.