For those of you that are Dr. Who fans, the title might have some extra meaning, but I am referring to the strange and sudden silence of the Sun.

The Sun has a cyclic period of activity that normally repeats every 11 years or so.  We are currently in solar cycle 24 of the modern era. 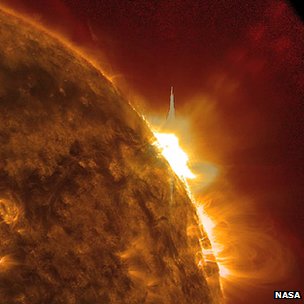 Not only are we in this cycle, but we are at solar maximum, where the most activity by the Sun usually occurs.  Lots of sunspots, flares, coronal mass ejections and the like.

But apart from the odd event, like some recent solar flares, the Sun has been very quiet.  The drop off in activity is happening very quickly, and scientists are now watching closely to see if activity will continue to decline.  The last time that the Sun was this quiet was in the 17th century, in a period known as the Maunder Minimum.

An analysis of ice-cores, which hold a long-term record of solar activity, suggests the decline in activity is the fastest that has been seen in 10,000 years.

Why would another Maunder Minimum be bad?  Well the last time this happened, the world, but especially Europe because of the effects this type of event has on the jet stream, entered into a mini ice age.  This could be a bad thing or a good thing depending on how it plays out.  Due to man made climate change, this new Maunder Minimum could be a lot more severe which would affect agriculture and other food supply areas.  On the other hand, the polar ice caps have been melting at an alarming rate and this event would probably restore them.  There isn’t enough data to figure out what is happening or what the results will be, but in a few years we may be bundling up here in Southern California for the harsh winters.  Dang, that would mean I’d have to move farther south.  So let’s just hope this isn’t a run up to another ice age.