Conversely to the famous Battlestar Galactica television series statement, scientists now believe that any life found in the Solar system may have started here.  But how could that happen?

Most people know that the KPg impact caused by a 6 mile wide asteroid hitting Earth killed up to 90% of all life on the planet and ended the era of the dinosaurs and began the rise of mammals.

This impressive event also had additional side affects.  Ejecta from the impact actually left the planet.  If you knew where to look, you would find material on the Moon that came from that event.

However, a new study posits that life spread from Earth to other planets and moons during and earlier era of asteroid impacts, about 4 billion years ago.  These multiple impacts could have carried life here back to the heavens. 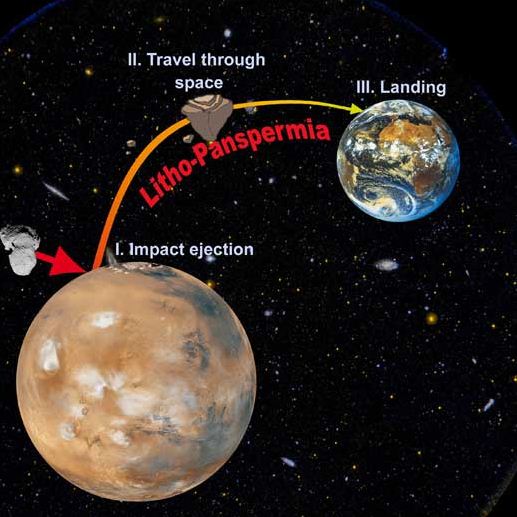 But is this likely?   Given the fact that of the 53,000 meteorites found on Earth, 105 have been identified as coming from Mars it is extremely possible that reverse has happened as well.

The technical term for this is lithopanspermia: the idea that basic life forms can be distributed throughout the solar system via rock fragments cast forth by meteoroid impacts.  So it may have happened that comets brought life to Earth and then asteroid and comet impacts took it from here to the rest of the planets and moons.

So with extra-planetary life possible in our own neighborhood the words spoken by Patrick Macnee at the start of a classic TV show:

“There are those who believe…that life here began out there, far across the Universe…with tribes of humans…who may have been the forefathers of the Egyptians…or the Toltecs…or the Mayans…that they may have been the architects of the Great Pyramids…or the lost civilizations of Lemuria…or Atlantis.

Some believe that there may yet be brothers of man…who even now fight to survive—somewhere beyond the heavens!