On Friday, October 14th, I received an email from the World Intellectual Property Organization (WIPO) that effective November 1st, 2011 the fees for filing an international patent (a PCT) will be increasing.  The entire fee schedule can be found here:  http://www.uspto.gov/patents/init_events/pct/sample/fees.jsp.

On 20 June 2011, ICANN, the international body governing internet naming policy, gave official approval to the new Top-Level Domain (TLD) program. The policy will allow domain names to terminate with almost any word and in any language or script, thus enabling companies and communities to create their own customized domain names, for example, .company, .trademark, .industry or .anything. This expansion of the domain name system will have a significant impact on the structure of the internet and will affect all businesses with an online presence. Now that the program has been officially approved, it is important for businesses to consider the opportunities and threats that this new policy creates and to ensure that appropriate strategies are implemented.

What are the benefits?

Brand owners may find many advantages in acquiring a new TLD. For example, it could create a secure name space which could help reduce the sale of counterfeit goods. It could also help strengthen the association between their brand and their location on the internet, simplify complex URL strategies and create novel opportunities for online interaction. Even if a business has decided not to apply for a new TLD, it may still consider investigating whether its sector is protected by a TLD belonging to a trusted online community such as, for example, .bank or .pharmacy, which it could adopt in the future.

What are the concerns over the new program?

There is a concern that the release of a potentially unlimited number of TLDs will result in an increase in cyber squatting activity. However, it is doubtful whether this will be a significant problem in reality given the high costs involved in registering a TLD (discussed below). Opponents of the policy also argue that consumers will end up confused by the new system. If this turns out to be true, then it could mean that the .com will become even more reliable and valuable than it is now.

How much will a new TLD cost?

Acquiring a new TLD will not be the same as simply registering a domain name. The applicant will be creating and operating a registry business which will entail significant responsibilities and costs, including an application fee of US$185,000 (£115,000), annual ICANN fees of US$25,000 (£15,500) as well as ongoing operational registry costs. The cost of simply getting a TLD up and running is estimated to be in the region of £1 million. It is also important to note that ICANN expects all new TLDs to become and remain operational, so it will not be possible simply to reserve one for defensive purposes. Failure to keep the domain operational could lead to ICANN re-delegating a trade-marked TLD to a third party in order to keep it alive.

When can I apply for a TLD?

Applications will be accepted from 12 January 2012 to 12 April 2012. On 27 April 2012, a list of applications will be published, at which point there will be an opportunity for right holders to object. Following a further analysis period, the first TLDs are expected to go live in early 2013. It is important for brand owners to pay close attention to the objection deadlines. It is not yet clear how much the objection process will cost but the window to oppose will be short, so brand owners will need to be vigilant.

Can I adopt a wait and see approach?

For those who prefer to stay out of the domain name race and adopt a wait and see approach, it is important to bear in mind that it could be another two to four years before the next application round. With such long timelines, competitors could take the advantage and gain greater online presence by being among the first in the sector with a TLD.

How will the internet be affected by the program?

It is unclear how the internet will develop in 2013 and beyond. In 2010, ICANN estimated that they were expecting at least 400-600 TLD applications, although so far only Canon, Deloitte, Hitachi and UNICEF have announced their intention to apply, with most companies keeping their intentions private. The benefits of the new TLD may turn out to be exaggerated, as demonstrated by the last round of TLDs such as .biz, .travel and .jobs which so far have not been taken up as much as had been expected. To quote Rob Beckstrom, the President and Chief Executive of ICANN, “No one can predict where this historic decision will take us.”

Steve Jobs the founder and savior of Apple Computers has died.  The world is a sadder place and will miss his innovation and style that has defined generations of computer users, music lovers and artists.

Steven Matousek the advanced concept development manager for JPL and the former proposal manager for the Juno mission will be speaking to the Riverside Astronomical Society on October 15th, 2011.  Everyone is welcome.  More information can be found at www.rivastro.org. 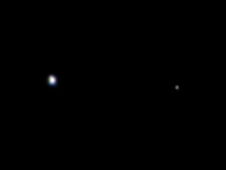 This image of Earth (on the left) and the moon (on the right) was taken by NASA’s Juno spacecraft on Aug. 26, 2011, when the spacecraft was about 6 million miles (9.66 million kilometers) away. It was taken by the spacecraft’s onboard camera, JunoCam. Image credit: NASA/JPL-Caltech/SwRI
› Larger view

PASADENA, Calif. – On its way to the biggest planet in the solar system — Jupiter, NASA’s Juno spacecraft took time to capture its home planet and its natural satellite — the moon.

“This is a remarkable sight people get to see all too rarely,” said Scott Bolton, Juno principal investigator from the Southwest Research Institute in San Antonio. “This view of our planet shows how Earth looks from the outside, illustrating a special perspective of our role and place in the universe. We see a humbling yet beautiful view of ourselves.” 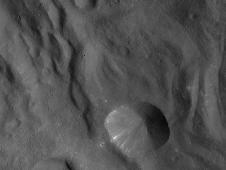 In this image of Vesta, taken by NASA’s Dawn spacecraft just shortly before the beginning of high altitude mapping orbit, north is up and the upper right corner is to the northeast. Image credit: NASA/JPL-Caltech/UCLA/MPS/DLR/IDA

PASADENA, Calif. – NASA’s Dawn spacecraft has completed a gentle spiral into its new science orbit for an even closer view of the giant asteroid Vesta. Dawn began sending science data on Sept. 29 from this new orbit, known as the high altitude mapping orbit (HAMO).

In this orbit, the average distance from the spacecraft to the Vesta surface is 420 miles (680 kilometers), which is four times closer than the previous survey orbit. The spacecraft will operate in the same basic manner as it did in the survey orbit. When Dawn is over Vesta’s dayside, it will point its science instruments to the giant asteroid and acquire data, and when the spacecraft flies over the nightside, it will beam that data back to Earth.